The term blessing comes from a Latin word that refers to the action and effect of blessing. This verb, for its part, is a way of calling the action of praising, exalting or exalting, of consecrating something to divine worship or of invoking divine blessing on behalf of something or someone.

Some examples where the concept appears are: “I am going to ask Father Miguel for the blessing for the new house”, “Daughter, you have my blessing to marry Darío”, “The bishop was in charge of giving the blessing to the plane that will depart with help Heading to Africa ”.

A blessing can be expressed in multiple ways, without an explicit mention of the act of blessing. The phrase “May God keep you” is also a blessing.

It is also said that a blessing is what is believed to be obtained through divine intermediation (when a priest invokes God to bless) or by the will of a person. In the latter sense, expressions such as “Good luck” or “Strength to overcome this” can be understood as blessings.

The approval or agreement that one person gives to another can also be considered as a blessing: “The boss gave me his blessing to move forward with the project”, “With the blessing of his family, little Timmy decided to go after his dreams and embarked for distant lands ”.

Prayers to ask for Blessing in the Mapuche People

In the Mapuche culture there are a series of prayers that are made to ask the blessing of nature to the people.

These prayers are called rogatives and are believed to be highly effective. Every time the town gathers for the days of prayers that aim to ask for rain for their crops, the climate changes and things seem to be on track.

In the prayers, the people accept their mistakes and apologize for them to nature; and then begs for mercy, so that balance reigns again.

The entire town participates in these celebrations, guided by the loncos (the elderly, chiefs and teachers). A small hole is made in a specific place and danced to the rhythm of the cultrún (a leather drum bearing the town’s insignia) and the pifilka (a small one-note flute). In addition, a little of the cultivated yerba mate and muday (a drink made from fermented wheat) is offered to the land (the benefactress), as an offering for her blessings.

The people face the east while the loncos kneel and extend their hands towards the sun and pray in their language, Mapudungun. It is worth mentioning that the text used for these sentences is not pre-established; the lonco who directs it expresses what he feels he should say and how he should do it; thus establishing a dialogue with nature. But most of the prayers revolve around the request for blessing through the rain and the well-being of all people and animals. At the end, the offering is made. Each person who has previously received a handful of yerba mate, must deposit it in the small hole, while the loncos continue to pray.

The land blesses the Mapuche people with rains and a good harvest, thus establishing a balanced and irrevocable bond. 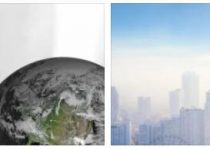